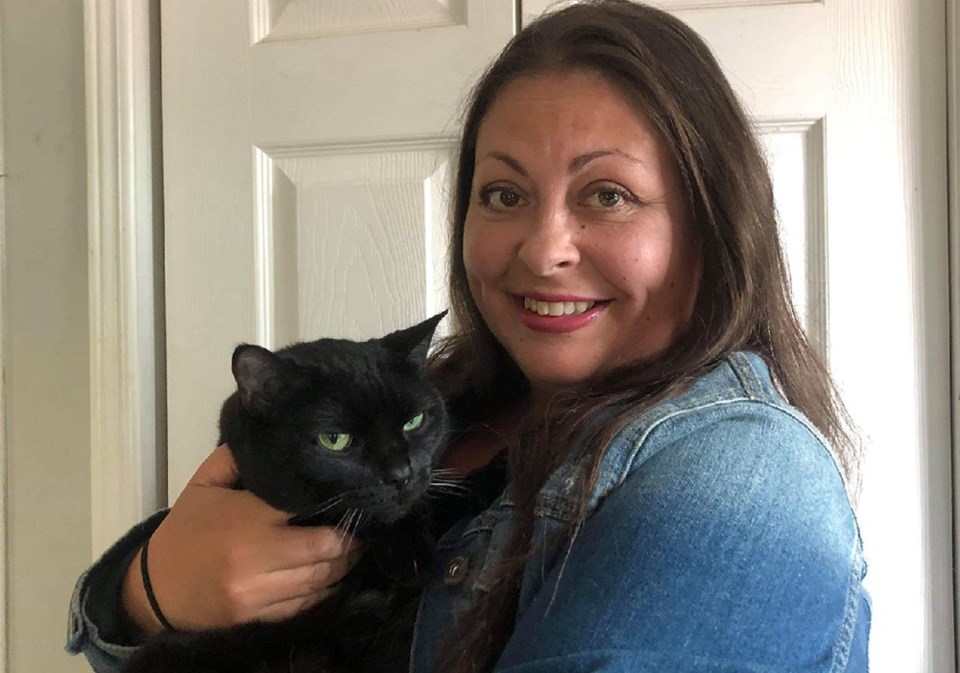 Irene Louro with cat; her volunteer efforts have reunited families with their lost pets. SUBMITTED

When Irene Louro heard about the June 30 fire at a home on Tornado Drive, in the Holland Marsh, she was not only concerned. She was driven to act.

The family involved was able to escape the blaze, rescuing one of their dogs - but another dog and a cat were reportedly still missing.

Louro, founder of the Bradford Ontario Lost and Found Pets Facebook page, was quick to connect with responding police and firefighters, and check the scene.

A search by the fire department the next morning located the remains of the second dog, but not the cat. That’s when Louro set to work – laying down a scent line and setting up a live trap, in hopes of recovering the family’s beloved missing feline.

It’s something that Louro and her team of volunteers have often done before.

Once informed of a missing pet, on Facebook or by phone, their first concern is to provide support and information to the family, before conducting a physical search.

The worst thing to do is to gather a large group, calling and searching through an area for an animal that may have been traumatized by a car crash, a house fire or other event. It’s far better to allow a small team to carry out the search, said Louro, using scent to attract the missing animal to a feeding station or live trap.

Traps are monitored every two to four hours, depending on the weather. If no one is available to check, the trap is wired shut or open, to ensure an animal is never trapped for an extended period of time.

Every step is well-thought out, and carried out as soon as possible because “there’s no time to waste.”

Louro wasn’t always a pet detective or pet rescue professional. She used to be a PSW (Personal Support Worker) and caregiver.

“I cared for seniors, in private care, for 10 years, and worked at Bradford Valley (Care Community),” she said. She was also working toward a future Nursing degree, when she was suddenly forced to leave her job because of back issues.

“All of a sudden, I can’t move,” she said. For the next seven months or so, she focused on her health – but all of the inactivity was making her “antsy,” she admitted

What happened next was pure serendipity.

A Bradford friend called Louro for advice about a cat that was hanging around her front door. “I’ve always been a ‘crazy cat lady.’ I’m proud of that,” Louro said; and friends have always contacted her with their “cat questions.”

But just one hour after the original query, she was contacted by another woman, who had lost a cat in the same area.

As it turned out, it wasn’t the same cat – but the whole incident led Louro to ask, “Doesn’t Bradford have a Lost and Found page?”

She checked online and on Facebook, only to discover that the answer was no - there was no page dedicated to lost and missing pets.

“I started one that night, and the rest is history,” she said.

That was five-and-a-half years ago.

Bradford Ontario Lost and Found Pets is now a Facebook group with over 2,300 members, that has been instrumental in highlighting missing pets, and reuniting pet parents with their cats, dogs, birds – even reptiles.

Louro always helped out whenever a neighbour reported a lost pet. Now, with a team of volunteers and her Facebook connections, she's able to bring a new level of commitment to the search.

Although her back was still an issue, she made the decision: “I can’t care for people, but I can care for animals.”

She also discovered that “Facebook was an amazing tool for lost pets!"

The page focuses primarily on Bradford and surrounding areas – as far south as Newmarket, east to Holland Landing, west to Beeton, and north to the edge of Barrie.

“What is priority is getting the word out to neighbours,” she said. If that doesn’t get a response, the search can always be expanded – but the key is to start looking as soon as possible, in an area where neighbours can be vigilant.

Louro has been involved as both a consultant and a searcher far outside of the Bradford area, over the years  – helping to search for a dog from Korea that bolted in the Richmond Hill area on Christmas Eve; providing advice to a U.S. family; taking on the rescue of a Barrie-area cat colony.

But, she said, “my focus and my priority is Bradford and surrounding area… My heart belongs to Bradford.”

Louro, the administrators of the Facebook page, and all of the searchers, are volunteers. “We choose to do this,” she said. There are no fees – although they have accepted donations, for equipment like live traps and wildlife cameras, but never for their time, gas, or mileage.

She has also been involved in a Ground Search pet rescue team, runs the Barrie & Area Lost & Found Pets page, and is co-founder of the local Pet Food Bank, providing dry kibble and canned food primarily for dogs and cats, but also for birds and rabbits, to families facing temporary financial hardship.

There are more families in need than the founders originally expected. In fact, Louro said, “We were heart-broken at the numbers.”

Those families may be faced with re-homing a beloved pet, “when they’ve got to choose between feeding their kids, or their pets.” The Pet Food Bank provides a way to keep families and their pets together.

Bradford Ontario Lost and Found Pets has had many successes, but it has an even more important role.

“We support families,” Louro said, at a time that is often “an emotional roller coaster for families.”

After all, at heart, Louro is still a caregiver.

For more information, or to connect with Bradford Ontario Lost and Found Pets, click here.