'Where there’s a need, there’s a Lion': Longtime Bradford Lion volunteer, director gives back to the community 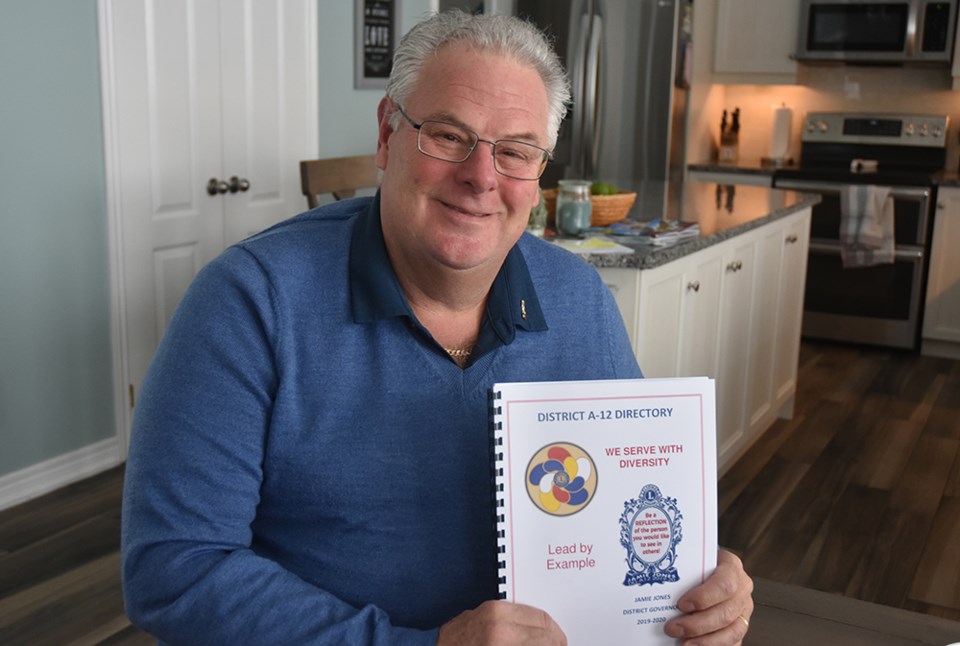 When Jamie and Sue Jones moved to Bradford back in 1988, it was a different community.

The population of Bradford was about 3,000 people, and “the only set of lights was at the Four Corners,” Jamie noted, while the OPP Station on Melbourne Drive marked the western boundary of the village.

There was a different sense of neighbourhood, as well. The Jones’ home on Hudson was backed by open fields, not houses, and neighbours would get together for activities like an annual Christmas Tree bonfire, to mark the new year.

When the area began to be built up, they moved to Compton Crescent. Life was busy for the young family.

Jamie, a professional engineer, started his own business, J.R. Engineering. The kids were involved in minor sports – a son in Triple-A hockey, a daughter in figure skating.

Jamie thought of joining a service organization, and was invited to join the Rotary Club of Bradford, but hesitated.  “I didn’t feel I could commit the time,” he said.

If he joined anything, he wanted to be able to give it his all. “If I’m in, I’m all in,” Jones said.

The time came six years later, in 2010, when he joined the Bradford Lions Club.

Jamie attended a few meetings before deciding to become a member. He remembers the date well: April 19, 2010. “It was my wedding anniversary!”

He had volunteered in the community before then, helping out with local charity golf tournaments. In fact, it was golf that drew him to the Lions: a long-time organizer of the annual Lions Golf Tournament was retiring from the event, and Jones knew he had the experience and the skill set to take over running the event.

“I figured I was ready to give back,” he said. “That was my beginning.”

Jamie quickly developed a passion for Lions, the world’s largest service club with 1.4 million members worldwide. He was especially interested in Dog Guides of Canada, its national charity, and the opportunities for learning and sharing offered by the club.

Serving on the executive of the Bradford Lions, Jamie became President – and when the opportunity arose to become Zone Chair, he accepted the challenge.

The Bradford Lions Club is in District A-12, one of ten districts within Multiple District A (MDA) which stretches from Windsor east to Cornwall, and from Lake Erie north to Hudson Bay. It includes a number of clubs in Quebec.

District A-12 is subdivided into seven Zones. Bradford, along with clubs in Alliston, Bond Head, Schomberg and Tottenham, is in Zone 8 South.

As Zone Chair, he travelled, supported the clubs, and said, “I enjoyed it so much, I did it for a second year.”

It is a whole different level of service. He is still deeply involved in the local Bradford Lions Club – working on events like the annual Breakfast with Santa fundraiser for the local food bank, and chairing the annual Lions Car Draw – but he now also travels throughout District A-12, which includes all of Muskoka, to attend Council meetings and visit other clubs.

At the Lions Dog Guides of Canada facility, he had the opportunity to meet with several of the clients. It impressed him greatly, and helped him understand just how deep that impact was.

He has also seen how the Lions’ program to recycle and refurbish used eyeglasses, delivering them to countries where vision care is limited, has changed lives.

“It’s powerful stuff,” he said. “Most have no idea the impact we’re having… It’s powerful. It really is.”

Jamie has attended leadership forums in the U.S., and taken training at Lions University. “You come away with new ideas, inspiring projects,” he said.

As District Governor, he has introduced his own special project, to raise funds for Camp Oochigeas, a camp for kids with cancer.

Located in Muskoka near Rosseau, ‘Camp Ooch’ provides a camping experience “where kids affected by childhood cancer can just be kids.”

“About 4,000 kids in Ontario each year are afflicted with cancer,” said Jones. Camp Oochigeas is the only camp in Canada “where the kids can have chemo on site,” and still participate fully in camping activities, he noted – experiencing friendship, laughter, a sense of belonging, and ‘life-changing support’.

His special project? To raise $28,000 to equip four camper cabins with fully handicapped-accessible doors, making it easier for kids to get out and participate. His project invites sponsors to give a gift to the camp - $125 for a bronze sponsorship, $250 for Silver, $500 for Gold.

Recipients will receive a certificate, and a mirrored pin with the inscription, “Be a reflection of the person you would like to see in others.”

Jamie is hoping that the project will become a regular part of Lions’ fundraising, “hopefully long after I’m gone.”

Camp Ooch is not the only specialized camp supported by Lions. There’s Camp Trillium, a camp for kids with cancer which recently merged with Oochigeas; Camp Huronda for those with Juvenile Diabetes, Dialysis Camp Dorset, and CNIB Camp Joseph.

“Where there’s a need, there’s a Lion,” Jamie said, “but there are really more needs than Lions right now.”

That’s another of Jamie’s goals - encouraging new members and new Lions clubs in locations like Honey Harbour and Midland, and the Bradford area.

Right now, there are only five Lions Clubs in Zone 8 South. “Lost” clubs include Cookstown, Beeton and Gilford, and Jones is hoping to the return of a club in the Cookstown area, giving new and old residents, including women and Youth, an opportunity to serve their own community, and lead by example.

Jones is kept busy with Lions, but he is also a Mason, attracted to the fraternal organization by its goal, to “make good men better.”

“My grandfather was a Mason, but I knew nothing about it,” Jones said. As he investigated, “I thought it might be motivation for self-improvement.”

He is now Secretary of Simcoe Lodge 79 A.F. & A.M., and a member of the Viking Shrine Club in Aurora, the fundraising branch of the Masons – but has pulled back a little from an active role in the organization, due to the demands of Lions.

It has definitely been a journey.

Jones is a Melvin Jones Fellow, Judge Brian Stevenson Fellow, and Camp Huronda Guardian – all honours within the Lions Club. His role, first as Vice District Governor and now District Governor, has led him to a more international engagement, attending conferences and meetings in the U.S. and in locations that include Milan.

And at the Council of Governors taking place Feb. 21, he will be letting his name stand for election as A-12 Council Chair.

“You never plan this journey. You never know where it will lead,” he said. “I never expected this journey to happen. I was just happy to be a Lion.”

Jones is passionate about the Lions Club, “one of the best kept secrets in our community. Even Lions don’t know all that we do.”

“You get out of it what you put into it.”

For more information about the Bradford Lions Club click here.

From Community Meals to Treasure Sales, Bradford church volunteer finds time to give back
Mar 19, 2020 7:45 AM

'It really is a team effort' say local hockey mom volunteers
Mar 12, 2020 8:00 AM
Comments
We welcome your feedback and encourage you to share your thoughts on this story. We ask that you be respectful of others and their points of view, refrain from personal attacks and stay on topic. To learn about our commenting policies and how we moderate, please read our Community Guidelines.