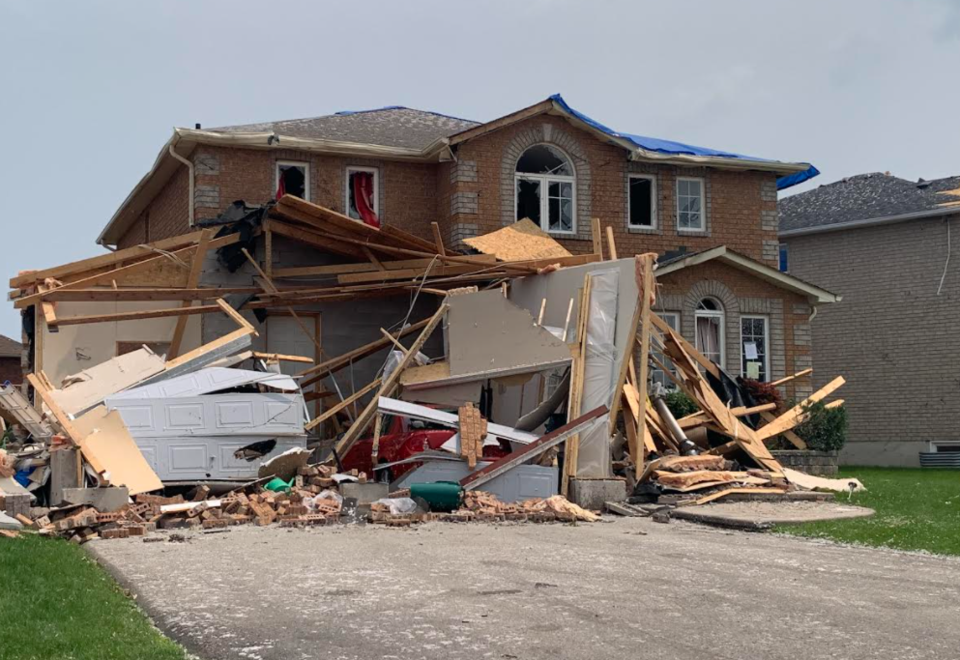 Clean-up efforts continue on Tuesday afternoon in the south end of Barrie, where a tornado touched down on July 15, 2021. Raymond Bowe/BarrieToday

A mix of property and vehicle loss resulting from last week’s tornado squarely pegs the event in the 'catastrophic loss' category, expecting to well exceed the $25-million claims threshold.

Glenn McGillivray, managing director of the Institute for Catastrophic Loss Reduction, said it is “considerably worse than the Angus tornado,” which had a 20-kilometre track and also affected south-end Barrie, resulting in about $50 million in damages.

Of the 103 homes that sustained damage from an EF2 tornado in Angus and area on June 17, 2014, close to a dozen had to be replaced.

A true estimate of the damage claims anticipated from Thursday’s tornado in southeast Barrie and Innisfil won’t be determined for several weeks. McGillivray said the high prices of lumber, resulting from shortages during the pandemic, will undoubtedly add to the bottom line.

Currently, 67 unsafe orders remain on homes in the tornado-devastated area in south-Barrie around Prince William Way and Mapleview Drive East.

That number has been shrinking daily as engineers examine each home before they are deemed safe to occupy again.

Canadians have been experiencing increasing impacts from natural disasters in recent years, resulting in more than a 400 per cent increase in insurance pay-outs in property and auto claims since the early 2000s, said Craig Stewart, vice-president of federal affairs for the Insurance Bureau of Canada.

Until 2009, the estimated annual claims resulting from natural disasters averaged $400 million annually. A rapid acceleration followed and insurers are now paying out approximately $2 billion every year.

“Canada is warming at twice the rate of most of the rest of the world,” Stewart said. “So Canada is becoming a riskier place to insure. We’ve seen that borne out over the past decade with claims and it’s just going to accelerate from here.”

He points to the EF3 tornado that hit Ottawa two years ago, the wildfires in British Columbia, flooding in 2017 and 2019, and last year’s hail storm in Calgary, which caused $1.4 billion in damage in 20 minutes.

Last year’s $2 billion in insurance pay-outs was one of the worst on record, Stewart added.

“Property claims are beginning to approach vehicle claims in terms of the insurance industry’s bottom line,” he said.

In addition to climate change, McGillivray points out that Canada’s built landscape is constantly expanding and communities are growing, increasing the overall chance of damage.

“We call this the growing bull’s-eye effect,” he said. “This is the main driver of loss — the fact that our communities are getting bigger, they’re wealthier and when you used to have one old used car in the driveway, now people have three nice cars in the driveway.”

McGillivray points to Barrie, which had a population of 50,000 in 1985 when a tornado tore a lengthy path through the city’s south end around Essa Road and Highway 400. The population has since tripled and the area that sustained the vast majority of the damage last Thursday was farmland at the time, containing very few homes.

Both McGillivray and Stewart say there needs to be improved efforts to mitigate against damage from natural disasters. They’re part of the growing voice calling for improvements to building codes.

McGillivray says building deficiencies were identified in the homes damaged in the Angus tornado and an engineering professor who surveyed the damaged houses in Barrie last week found that some roofs were not properly nailed to the walls.

Although a city official said that given the strength of the wind, up to 210 kilometres per hour, it’s not surprising that roofs were blown off. She said it’s not reasonable to expect a roof to resist tornado-strength winds and resulting forces when they are not required to be designed for that.

“Building deficiencies have to be addressed,” said McGillivray, who echoed earlier calls for increased preventative measures in construction, such as the use of hurricane straps, which he says are cheaper than the lowest deductible fee for home insurance coverage. “We know they work in the field, we know they work in our labs. We know how to do it properly.”

The national model building code, developed through Ottawa’s National Research Council to be released next year, is expected to include climate-resilient measures.

But Stewart says retrofit programs encouraged by governments often targeted at green initiatives, should also include allowances to protect homes against damage from wind, fire and flooding. Homes can be “reverse engineered," he said, to include preventative measures such as hurricane straps.

The insurance industry is also looking for risk disclosure on real estate listings nationwide to create awareness and demand for increased protection efforts. That includes homes located in areas considered to be high risk for flooding, fires, wind and hail.

Currently, there’s a gap and not everyone is protected against flooding. Stewart says there are efforts underway to address this through a public-private partnership.

“For that to happen, the government has to step in in Canada to help partner with us to make those programs work in the same way the governments of France, Great Britain and the United States have already done,” he said. “Canadians, including those in Barrie that were hit by the wind storm, are already protected by most events, flooding is the gap."