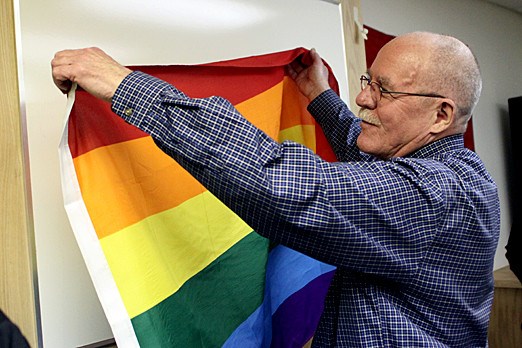 There is a gap in programming for LGBTQ youth and adults in Bradford West Gwillimbury, and the local library is stepping in to fill it, said Teen Services Librarian Lisa Worobec.

The BWG Public Library is launching new social programming for LGBTQ adults - young and old - next month, starting with a drag queen performance.

The library started a social drop-in program for LGBTQ youth last spring in partnership with The Gilbert Centre, which is based in Barrie. When the centre put a call out for places around Simcoe County to host adult programs, the library was quick to respond.

“I said, ‘Get in touch with me.’ There’s a gap in this type of programming in the community. We wanted to fill that gap,” said Worobec.

“We see it as a first step to creating a safe space environment. We’d like to grow our LGBTQ+ programming,” added Larissa Marks, the library’s community engagement co-ordinator. “It’s an opportunity for older LGBTQ+ adults … to socialize.”

The new programming will complement its counterpart for teenagers, which involves creating a safe space for teens to hangout, socialize, and, if they want, ask questions of a Gilbert Centre youth worker “you might not want to ask your parents (or) teachers.”

Programming for LGBTQ adults, particularly in a small town, is important because some people may find it difficult to come out later in life and become isolated without community support, said Jason Maclennan, seniors’ program co-ordinator at The Gilbert Centre.

Some LGBTQ adults fear going into long-term care homes because they may run into people who bullied them earlier in life or the workers may not be inclusive, Maclennan said.

Creating programming around Simcoe County for LGBTQ adults is a way to help them avoid feelings of isolation and depression, and understand older people can still lead vibrant lives.

“There’s this belief when you’re a certain age you’re supported to sit on your front deck and wait for death,” he said, adding many older people are skydiving and doing other exciting activities.

The goal with programs like at the BWG Public Library are to eventually make them intergenerational, connecting youth and adults, to build strong LGBTQ connections and acceptance throughout the community.

The Gilbert Centre wants to keep expanding its programming throughout Simcoe County and area, including Barrie, Collingwood, Midland, and Wasaga Beach, Maclennan said.

“It’s a different journey as we get older. The program’s exciting. We’re working to get the two generations together,” Maclennan said. “The Bradford library has been amazing. It’s going to be a great thing.”

The next LGBTQ teen drop-in event:

Pizza night. Food and beverages will be provided.

Will include icebreakers led by drag queens

Come in costume. There will be themed decor.

Dress up and have fun! There will be beverages, music and themed decor.

Police seek tanned man with rat tail in connection with car wash break-in
Sep 28, 2020 4:03 PM
Comments
We welcome your feedback and encourage you to share your thoughts. We ask that you be respectful of others and their points of view, refrain from personal attacks and stay on topic. To learn about our commenting policies and how we moderate, please read our Community Guidelines.