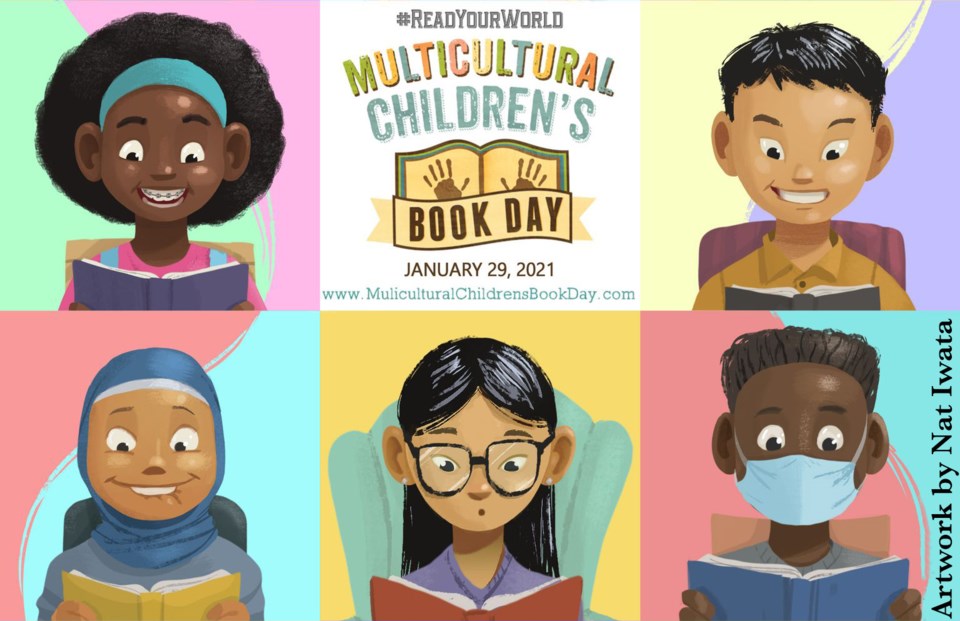 Celebrate Multicultural Children’s Book Day with the BWG Library on Friday, January 29 by reading books with diverse characters, written by multicultural authors.  Multicultural Children’s Book Day is an important day that helps to raise awareness and to increase the number of inclusive books in schools and libraries across North America.  Miss Bailey, Children’s Services Librarian, has chosen some of her favourite multicultural books and listed them below.  Reserve the books on this list then and pick up your selections through the BWG Library’s Curbside Pick Up Service.

If you need help finding the perfect book let Miss Bailey know!  Send a message through Facebook or email bwgmailbox@bradford.library.on.ca.  Or, if you have a book you think should be added to the collection, send your suggestion to her today.

Amy Wu and the Patchwork Dragon, By Kat Zhang

Amy loves craft time at school. But when her teacher asks everyone to make their own dragon, Amy feels stuck. Her first dragon has a long, wingless body, stag-like horns, and eagle claws, but her friends don't think it's a real dragon. Then she makes dragons like theirs, but none of them feels quite right ... None of them feels like hers. After school, a story from Grandma sparks new inspiration, and Amy rounds up her family to help her. Together, can they make Amy's perfect dragon?

A Thousand Questions, by Saadia Faruqi

Told in two voices, eleven-year-olds Mimi, who is visiting her wealthy grandparents in Karachi, Pakistan, for the first time and Sakina, daughter of the grandparents' cook, form an unexpected friendship.

Eighth-grader Drew Ellis is no stranger to the saying 'You have to work twice as hard to be just as good.' His grandmother has told him that his entire life. But lately, he's been wondering: Even if he works ten times as hard, will he ever have the same opportunities that his privileged classmates at the prestigious Riverdale Academy Day School take for granted?

To make matters worse, Drew begins to feel as if his good friend Liam might be one of those privileged kids. He wants to pretend like everything is fine, but it's hard not to withdraw, and even their mutual friend Jordan doesn't know how to keep the group together. As the pressures mount and he starts to feel more isolated than ever, will Drew find a way to bridge the divide so he and his friends can truly see and accept each other? And most important, will he finally be able to accept himself?

In southeastern Nigeria, twelve-year-old Mnamdi is determined to avenge his police chief father, who was murdered while triyng to rid the town of criminals, but Nnamdi feels powerless until he receives a magical object which gives him superpowers.

Julián at the Wedding, by Jessica Love

Julián and his abuela are going to a wedding. Better yet, Julián is in the wedding. Weddings have flowers and kissing and dancing and cake. And this wedding also has a new friend named Marisol. It's not long before Julián and Marisol set off for some magic and mischief of their own, and when things take an unexpected turn, the pair learns that everything is easier with a good friend by your side."

In this compilation of four separately published books, Pakistani American second grader Yasmin learns to cope with the small problems of school and home, while gaining confidence in her own skills and creative abilities.  Meet Yasmin is the first in a series by Saadia Faruqi.

Nibi is an Indigenous girl on the search for clean water to drink. Though she is faced with repeated obstacles, Nibi's joyful and determined energy become a catalyst for change and action as her community, and in widening circles, the country and government rally around her to make clean drinking water available for all. There is a strong underlying message that even when a problem seems too large to face, every bit that everyone does helps. And inaction is not an option.

Salma and her mother live in an apartment at a Vancouver Welcome Center, a home vastly different from their native Syria, where Salma's father still resides. When she thinks about him, "Salma's heart aches like a tiny fire in her chest." She notices, too, that her mother's characteristic laughter has disappeared since their move. After some brainstorming, Salma decides to make her mother a favorite Syrian dish. With help from the Welcome Center's community of refugees (a gay couple from Lebanon, people from Egypt, India, and Somalia), Salma translates a recipe, gathers ingredients, and-through some emotional trial and error-makes her mother a lovingly assembled foul shami that incites "a long, sweet laugh, like the echo of bells.

The Proudest Blue, by Ibtihaj Muhammad

Faizah relates how she feels on the first day her sister, sixth-grader Asiya, wears a hijab to school.  The Proudest Blue is also available as a Wonderbook.

Mia Tang thinks she's going to have the best year ever. She and her parents are the proud owners of the Calivista Motel, Mia gets to run the front desk with her best friend, Lupe, and she's finally getting somewhere with her writing! But as it turns out, sixth grade is no picnic.