Charitable lemonade stand in Bradford goes to the dogs

Past charities that have benefited from the lemonade stand have included SickKids and Southlake Regional Health Centre
0
Aug 20, 2018 6:00 PM By: Miriam King 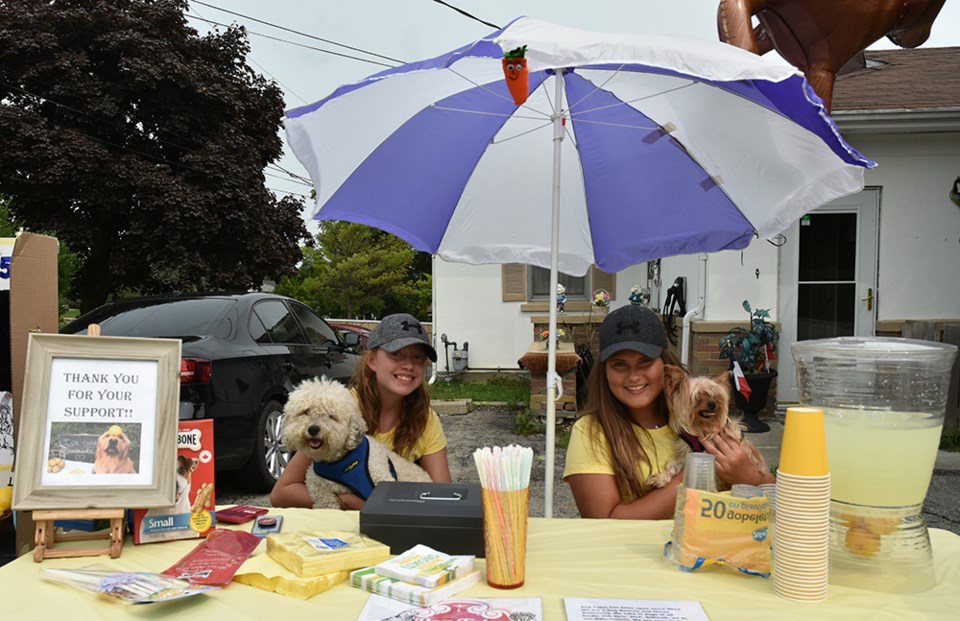 Emma, left, holding her grandmother’s dog, Bengie, and Mirabelle, with her dog Tessa, at their lemonade stand that raised money for Dog Tales Rescue and Sanctuary in King City. Miriam King/BradfordToday

For Emma Assis, her lemonade stand was a dream come true. Literally.

“I had a dream about opening a lemonade stand with my friends. I asked my mom, and she said, 'Yes,'” said Emma. “My dream came true.”

The very next day, mom Josie helped her mix up a batch of lemonade, and set up a stand in front of their Colborne Street home, just hoping, “Oh please, let her sell one glass.”

The next thing she knew, Emma was calling for more cups.

The fourth annual lemonade stand was set up on Saturday, coinciding with Carrot Fest. Balloons caught the attention of pedestrians, as Emma and friend Mirabelle Petch handed out cups of lemonade for 50 cents, with all of the proceeds going to Dog Tales Rescue and Sanctuary in King City.

Through the lemonade stand, the girls have previously raised money for SickKids hospital in Toronto and Southlake Regional Health Centre in Newmarket. This year, they were inspired by the Dog Tales Rescue TV show, which follows the day-to-day operation of the sanctuary.

“We saw it on the TV, and we thought it would be good to give it to the dogs” said Emma. In fact, one of their customers on Saturday was a family that had adopted a dog from the rescue organization. “They bought four cups, and they gave us $10,” Emma said.

Business was non-stop, and Josie had to keep mixing up more lemonade to keep the stand supplied. By the end of the day, the two entrepreneurs were sunburned and tired, but they had raised just more than $200 for Dog Tales.

They’ll be heading to Dog Tales this weekend to present their donation and tour the facility.

Our (ridiculous) ideas for increasing the carrot content of Carrot Fest
Aug 17, 2018 8:30 AM
Comments
We welcome your feedback and encourage you to share your thoughts. We ask that you be respectful of others and their points of view, refrain from personal attacks and stay on topic. To learn about our commenting policies and how we moderate, please read our Community Guidelines.