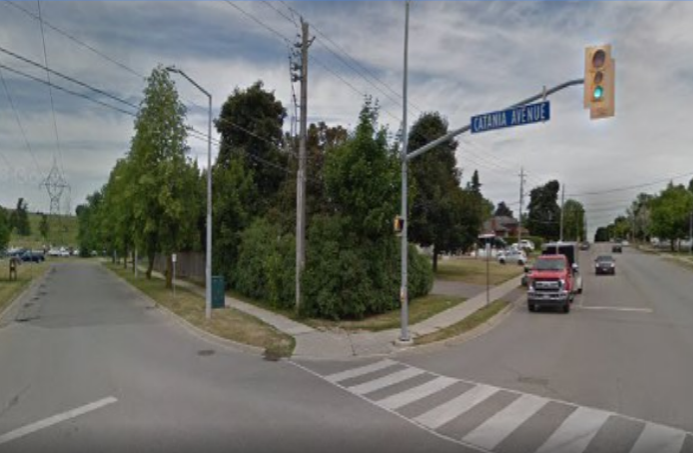 The intersection of Simcoe Road (at right) and Catania Avenue. Submitted photo

The town will spend $98,000 to fully signalize an intersection off Simcoe Road after repeated complaints about speeding and a crossing guard being clipped by cars, Bradford West Gwillimbury council voted Tuesday evening.

The recommendation came from the town’s Traffic Committee, with several options, from doing nothing, to relocating the crosswalk at the corner of Simcoe Road and Catania Avenue at a cost of $150,000.

“This is my fifth year on the (Traffic) Committee, and this is critical,” said Coun. Gary Lamb, noting there will soon be more housing development in that area, potentially amplifying the issue.

“I’m looking at the safety aspect of this. It’s one of the most used crosswalks. It’s a people-driver problem.”

Lamb said he supports full signalization of the intersection this summer to have it ready to go in time for school re-starting in the fall.

Coun. Gary Baynes added other options such as making left-turn restrictions from Catania onto Simcoe would just push more traffic onto other streets.

The issue is of such a serious nature there needs to be changes, town clerk Rebecca Murphy told council, noting South Simcoe police have been called to the intersection 22 times in the last two years, and a town-hired crossing guard “has been clipped a number of times” by cars turning while she is still in the intersection.

But Deputy Mayor James Leduc argued full signalization is not the answer to the problem.

“That’s just bad driving. There’s a simple solution, and it’s a lot cheaper,” he said, adding police could be asked to monitor Simcoe and Catania more regularly, especially during before- and after-school hours.

“We’re spending money on bad behaviour. It’s ridiculous. We’re going to (spend) that for 15 minutes of the day,” Leduc said. “I believe our staff should be taken care of, (but) it’s straightforward: enforcement.”

More police presence is not a realistic solution because they would have to sit at that intersection every single day, countered Coun. Mark Contois.

“We can’t control bad behaviour. We can control safety,” he said. “One child, one staff member hit in an intersection is one too many.”

The town has money in its capital expenditures reserve to cover the cost of intersection signalization, but it could also potentially use some of the roughly $850,000 in federal gas-tax funding it is expecting in the near future, said town CAO Geoff McKnight.

Council voted in favour of fully signalizing the intersection, with Leduc the lone vote against.