How one famous Simcoe County blacksmith wound up hanged for treason

A guest speaker lays out the aftermath of the failed Rebellion of 1837 at a meeting of the Bradford West Gwillimbury Local History Association
0
May 21, 2019 7:00 PM By: Miriam King 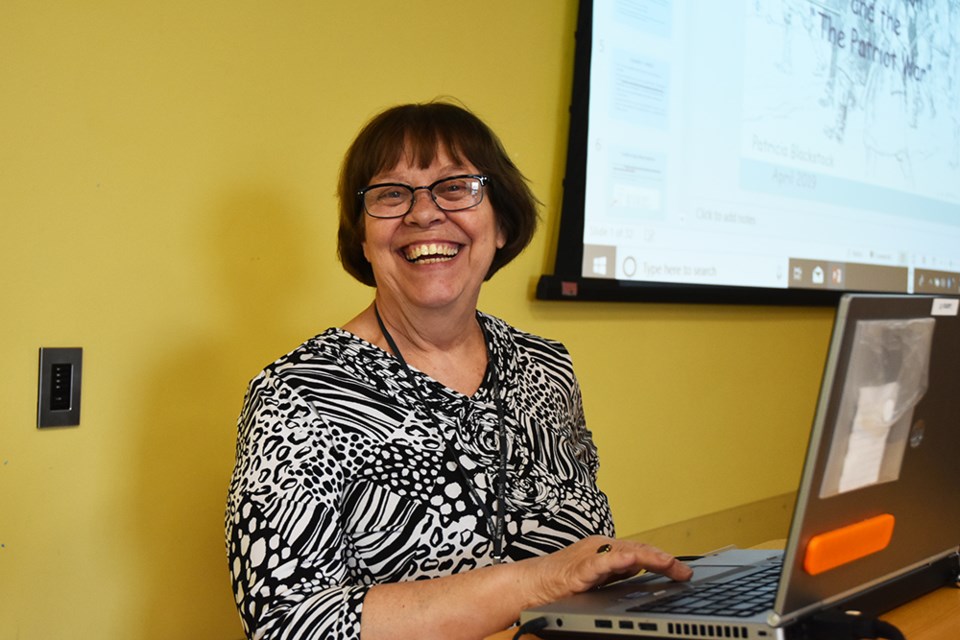 Patricia Blackstock was the guest speaker at the May meeting of the BWG Local History Association - talking about rebellion. Miriam King/Bradford Today

The BWG Local History Association recently welcomed guest speaker Patricia Blackstock, to share her research into the Rebellion of 1837 - including a look at some of the key players in a pivotal event in Canadian history.

The early settlers in Upper and Lower Canada had plenty of reasons to be discontented, said Blackstock.

They had come to a new land to find freedom of religion, and to make a new life, pursuing prosperity through their own hard work. Instead they found that the Family Compact and its system of patronage, as well as the Anglican Church, had a stranglehold on power, politics and the economy.

Crown and Clergy Reserve lands blocked transportation routes. The Anglican church had a monopoly on baptisms, marriages, and burials.

In the wake of the War of 1812, U.S. immigrants were banned from holding land or public office, although a compromise was worked out in 1826.

And in the 1830s, bad weather, poor harvests, and cholera epidemics added to the hardships.

Finally, dissatisfaction boiled over into rebellion, at the urging of William Lyon Mackenzie, journalist and politician.

It was a rebellion that attracted an unusual range of support – reformers, farmers, professional men, Methodists and members of the breakaway Quaker Sect, the Children of Peace.

Mackenzie urged armed rebellion, to begin Dec. 7, 1837 – suggesting there would be little resistance to an updrising. Instead, there was confusion, with some attempting to begin the rebellion earlier, on Dec. 4, and gathering at Montgomery's Tavern on Yonge Street, armed with nothing more than pikes.

When a force of between 500 and 800 finally marched on Toronto, they were met by fully-armed militiamen. Forewarned of the uprising, they had poured in to fight rebellion.

“There was no winning the battle,” said Blackstock during the May 18 meeting.

A number of ‘rebels’ were shot and killed by militiamen in the skirmishing – Anthony Anderson, Ludwig Wideman, James Henderson, and James Kavanaugh, who died of wounds received on Dec. 7.  The rest fled, including Mackenzie, who in his haste to get away left a list at Montgomery’s Tavern, containing all of the names of all the rebels.

It made it easy for the Loyalists to round up everyone who had taken part, and who didn’t flee to the U.S. They were tried for treason.

Others spent weary months in the King Street jail, where the prisoners’ boxes they carved are still some of the most poignant mementoes of the rebellion.

Lount was a pillar of his community, a blacksmith, and member of the Simcoe County legislative assembly until he was forced out by a corrupt process. He was hung on April 12, 1838, despite the presentation of an 8,000-signature petition, pleading for clemency.

Alexander McLeod was among the nearly 100 captured rebels who were tried and sentenced to be transported to Van Dieman’s Land, today’s Tasmania. McLeod died there in 1838.

John Montgomery, owner of Montgomery’s Tavern, was also sentenced to death, a sentence commuted to transportation for life to Tasmania – although he had been a volunteer at the Battle of Queenston Heights in 1812, and swore he had not taken part in the rebellion. His tavern was burned to the ground on the orders of Sir Francis Bond Head.

Blackstock quoted from Montgomery’s address to the judge and jury at his trial, when he claimed to be convicted on perjured evidence: “These perjurers will never die a natural death, and when you, sir, and the jury shall have died and perished in Hell’s flames, John Montgomery will yet be living on Yonge St.”

In fact, his prediction came true. While being held at Fort Henry, Montgomery and 14 other prisoners facing transportation discovered a trap door in their cell and escaped, making their way to Watertown, N.Y., and safety. Montgomery eventually returned to Toronto, reopening a tavern near the location of the original building, on Yonge. He even received compensation for the loss of his original tavern.

Blackstock traced the fate and fortunes of rebels that included Jesse Lloyd; Gabriel, John and Perciphen Hawke; family members of David Willson, founder of the Children of Peace; members of the Doan family, Leonard Watson – and William Lyon Mackenzie himself.

Mackenzie and about 200 followers fled to the U.S., Mackenzie setting up the “Republic of Upper Canada” on Navy Island in the Niagara River. He was finally driven out in 1838, when Canadian volunteers burned the ship Caroline, which had been bringing provisions to Navy Island.

Mackenzie continued to mount raids against the colony, from the U.S. – and in 1839, was arrested and sentenced to 18 months in an American jail for inciting Americans to attack a foreign government. He was eventually pardoned, and returned to Toronto.

The rebellion may have failed, but it led to change. The 1840 Durham Report recommended reforms and the institution of responsible government. And by 1844, all of the rebels had been pardoned.

The May meeting of the BWG Local History Association took place at the BWG Public Library on the Queen Victoria Day long weekend, appropriately enough: Queen Victoria began her long reign in 1837.

The position of vice president is vacant.

Coming up: On Sunday, June 16, the BWG Local History Association celebrates the 200th anniversary of the establishment of the Scotch Settlement, by families returning to Ontario from Lord Selkirk’s Red River Settlement, in Manitoba. The celebration will be held at the Auld Kirk Heritage Site on Line 6. Watch for details.