MPP Caroline Mulroney made an appearance at the town's Downtown Revitalization Committee on Wednesday evening, sharing her vision for the future of the downtown core.
May 9, 2021 2:30 PM By: Natasha Philpott 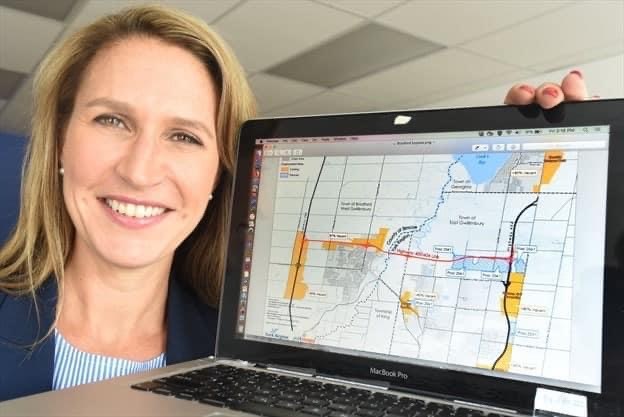 York-Simcoe MPP Caroline Mulroney made an appearance at the town's Downtown Revitalization Committee meeting on Wednesday evening, sharing her thoughts on the downtown's recent improvement initiatives.

She noted an improved transportation system will help the community as a whole, including the building of the Bradford Bypass.

"As the population grows, we cannot afford to delay planning for this project," she said, noting it is the provincial government's plan to invest over $21 billion over the next decade to support highway infrastructure projects like the Bradford Bypass.

The 16.2-kilometre link between Highways 404 and 400 will reduce traffic congestion and commute times, she said, allowing individuals to spend more time at home with family.

"Environmental stewardship is critical, and strong environmental oversight will be maintained for this project," she confirmed.

"This project will completely transform traffic issues in Bradford West Gwillimbury," she said, alleviating east-west congestion by transferring commuters to the new highway, saving up to 35 minutes of commute time.

The new highway will allow the downtown to become "pedestrianized", with wider sidewalks, trees and landscaping, and street furniture allowing for shopping and dining along Holland Street.

Mulroney discussed the future of the Bradford GO Train station and the improvements being made to allow for better service for commuters with the GO Rail Expansion program, providing faster service to and from the GTHA.  Metrolinx is planning to add an additional 80 parking spaces, a bus access lane, three new bus bays, an expanded passenger pick up and drop off area, additional sidewalks from nearby streets, and new pedestrian crossings to the Bradford station.

"These improvements will help ease parking lot congestion and make it easier than ever to get where you need to go," she said.

With many small businesses suffering through the third wave of the pandemic, Mulroney noted the provincial government has been able to help many business owners through two rounds of grant payments.

"Our local businesses are the backbone of our economy," she said.

To date, she noted approximately 100,000 eligible small businesses across the province have benefited from the small business grants, for a total of $6.3 billion in relief in 2021.

York-Simcoe has benefited from other provincial supports throughout the pandemic, including the $18,711,737 from the Gas Tax program (BWG received $378K of the funds), $3.7 million from the Ontario Community Infrastructure Fund (OCIF) to help build and repair roads, bridges, water and wastewater infrastructure, $68,575 from the Reconnect Festival and Event Program, and $647,200 for ongoing COVID-19 operating costs.

Mulroney is enthused by the idea of beautifying Bradford's entrance at the "eastern gateway" of town, which is currently in the works.

"These plans include trails along the canals, which would significantly improve the area, providing formal places for fishers and other tourists, as well as passive recreation options," she said.

The implementation of these ideas would help with the town's overall economic development, she said, and quality of life for community members.

With the current plans underway for the redevelopment of the Bradford Community Centre, new affordable housing project, and revamping of the old Bradford Public School, Mulroney said these investments will help beautify and bring more foot traffic to the downtown core.

"We have the potential to turn Holland Street into a hub for shopping, restaurants and business right here in our very own community," she said, ""the opportunity exists now, and together, we’re revitalizing Bradford West Gwillimbury."

Committee members were pleased with the feedback received on the plans for the future of the downtown.

Chair  Coun. Jonathan Scott thanked Mulroney for joining the meeting and providing updates for the community and future of the downtown.

"It's exciting to hear your support," he said to the Minister. "Knowing that our MPP shares our vision for downtown revitalization and is committed to working with us is critical."

"With the Bypass truly in the works, we can move forward with re-making Holland St into a 'complete street', one that is walkable and beautified for dining and shopping," said Scott.

He noted that improving and expanding the GO train station will help improve the eastern entrance to town. By having the MPP's support, helping to initiate conversations about trails along the canals and riverfront within the provincial government, he says is an important way to transform the eastern entrance into town by creating a waterfront area.

Murloney mentioned the town's plans to revitalize the community centre, build the town hall and renovate Bradford Public School into a community hub will be eligible for new provincial funding.

"And you better believe our staff will be applying for that support," said Scott. "It's an exciting time, as we kick downtown revitalization into high gear with these big capital projects, which will be so important to support small businesses, especially as we recover from COVID-19."

BEYOND LOCAL: Are smartwatches a bigger distraction to drivers than mobile phones?
Jun 16, 2021 8:55 PM