'Put on the woolies, wear lots of layers, then train your telescope on Orion for many wonderful sights,' advises our local astronomy expert
Jan 1, 2020 4:00 PM By: OrilliaMatters Staff 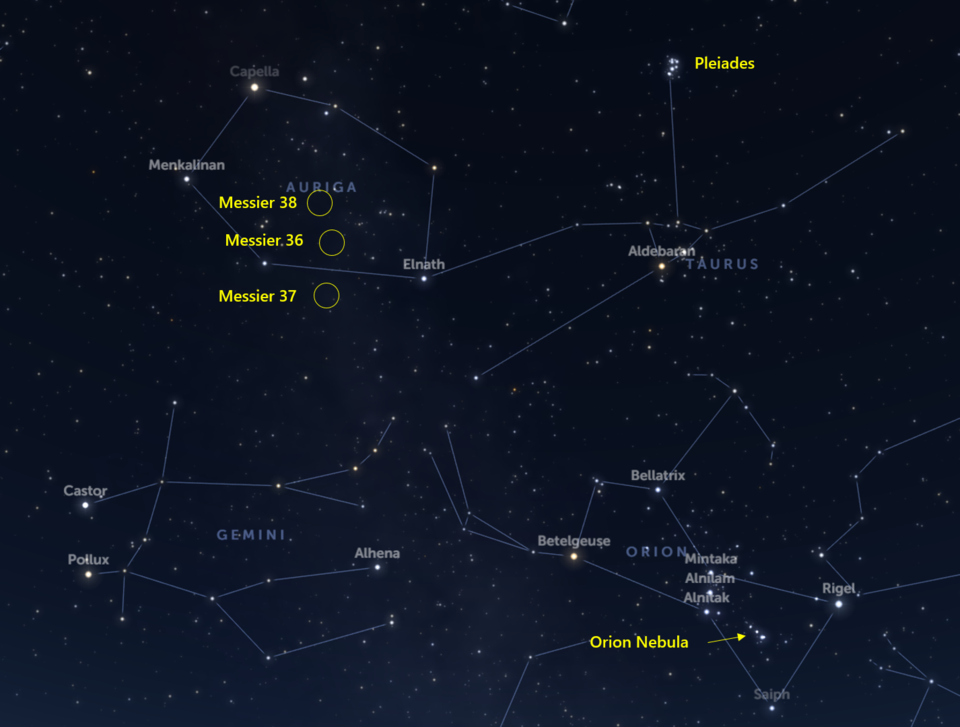 This graphic depicting Orion and Taurus and Auriga was produced with Star Atlas by Neave Interactive.

This article is submitted by Blake Nancarrow.
---

Did you see Venus near the Moon on the evening of Dec. 28? It was pretty spectacular.

I caught it quite late in the evening, so the setting crescent Moon was reddened with brilliant Venus directly above. You'll have another chance at the end of January. Have camera and tripod ready!

Venus, often called the "evening star," will be with us for months. Enjoy the bright beacon in the west before and after sunset. A fun experiment to try is to see how early before sunset you can spot the second planet from the Sun. Look up and left for the sparkler.

First quarter Moon will occur on Thursday, Jan. 2. View it with binoculars. If you can, mount your binoculars to a tripod for an amazing steady view. If your binoculars do not have a tripod mounting point, stand beside the house or a tree and steady the binoculars against it.

Luna will be full on Friday, Jan. 10. Third-quarter phase will happen a week later and, finally, the Moon will be gone on Friday Jan. 24, during the new
phase. The two weeks surrounding the new Moon are best for looking for deep sky objects.

The bad news is that the brightening Moon will again put up some interference with a meteor shower, the Quarantids, which run from late December to Jan. 12. This shower often yields a high number of meteors per hour during the short intense peak on Saturday, Jan. 4.

For the early birds, look in the east for red Mars, before sunrise. It is marching toward its rival in the sky, the orange star, Antares. Mars will slowly brighten as it grows larger all due to Earth drawing closer to the red planet.

It hasn't been terribly cold for us the last couple of weeks but surely the cold temperatures will return in January. I always like to point out to people that it is during this month that the Earth is closest to the Sun (perihelion). Our orbit is not a perfect circular, so six months from now, in the middle of the summer, we'll be further from the Sun (aphelion).

On Saturday, Jan. 4, we'll be closer to the Sun by 1 million kilometres! This is a good example of how the Earth-Sun distance is not the driver for our seasons; it is the axial tilt of our home world, of course, that makes for arrival of winter in the northern hemisphere in December.

So, keep warm, put on the woolies, wear lots of layers, then train your telescope on Orion for many wonderful sights. The Great Nebula or Messier 42 within the sword grouping will reveal wisps of emissive gas clouds and reflecting dust around a stellar nursery with four bright stars very close together, also known as the Trapezium.

Just below the left belt star, or Alnitak, is the small cluster of stars including the brilliant double star system, sigma Orionis.

There's been some chatter lately about Betelgeuse, the orangey star at Orion's left shoulder. Many astronomers have noted that the primary or alpha star is dimmer than usual.

Some are wondering if it is going to explode in a nova or supernova. If it does, it will be extraordinary and visible even in the daytime sky. I think it unlikely, but anything is possible. That means we all need to keep checking! Let me know if Betelgeuse suddenly brightens!

In the meantime, enjoy the wonderful colour contrasts. Betelgeuse is a relative cool super-giant M-class star, casting a warm glow; whereas Rigel, kitty-corner, at the bottom-right foot of The Hunter constellation, is a bright blue-white A-class super-giant star, shining like metal being arc-welded.

Now, three more fun targets. Astronomer Charles Messier added entries 36, 37, and 38 to his catalogue, open clusters all huddled in and around the big pentagon of Auriga, the Charioteer.

You might be able to identify the faint sprinkling of stars with binoculars but they are satisfying in the telescope. Look for different star colours, densities of stars, different sizes and shapes to each cluster.

Our Milky Way galaxy is filled with clusters like these. They are easy to pick off even with a bit of light pollution.

Keeping watching the skies!
---
Blake Nancarrow is an avid amateur astronomer. If not observing from his backyard in Bradford, he can be found under the stars at a club observatory on the Blue Mountains or at the David Dunlap Observatory in Richmond Hill. He is a contributing editor for the Royal Astronomical Society of Canada Journal.