Cathy Nesbitt, of Cathy's Crawly Composters, will also be hosting a presentation on how to grow 'nature's perfect food' at the Bradford West Gwillimbury Public Library
Jan 22, 2019 5:00 PM By: Miriam King 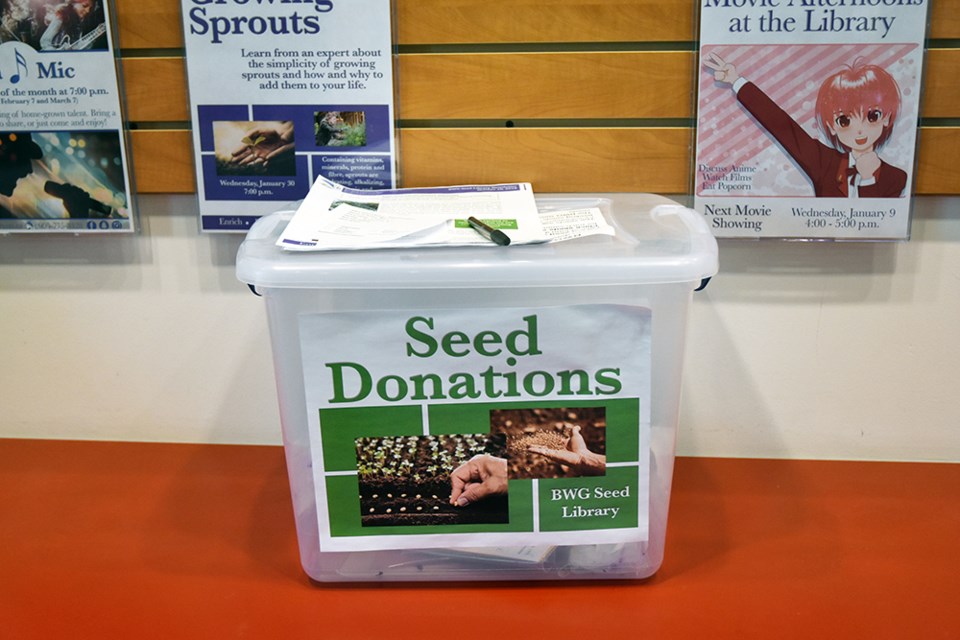 Seeds, sprouts and more at the Bradford library this winter. Miriam King/Bradford Today

Thoughts of spring and growing things are popping up at the Bradford West Gwillimbury Public Library.

It may be the middle of winter, but the new Seed Library is actively asking for donations of seeds harvested in the fall, and it has plans to hold its first Seedy Saturday event.

On March 16, from 9:30 a.m. to 3 p.m., visitors to the library will be invited to participate in gardening workshops and children’s activities, browse the displays set up by vendors, and participate in a seed exchange.

The event will also mark the formal launch of the Seed Library, which invites residents to “borrow” seeds for the growing season, returning new ones in the fall after the harvest.

And this month, the library is hosting a special presentation on growing sprouts, with guest speaker Cathy Nesbitt of Cathy’s Crawly Composters.

Nesbitt has been growing sprouts almost as long as she has been composting, selling Tony Hornick’s “simple, wonderful” sprouter, she said.

“I met Tony in 2002, when I started my worm business,” she said. He was 72 years old at the time and was selling his flying saucer-shaped Sprout Grower at the same show. “He wanted a worm bin. We did a trade: he got a worm bin and a pound of worms. I got two sprouters and a lifetime supply of beans. I’d never even heard of sprouts,” Nesbitt said.

She has since become an enthusiastic supporter of growing not only bean sprouts, but microgreens – alfalfa, broccoli, and oriental mustard sprouts, all of which are high in nutrients and anti-oxidants.

“Sprouts are nature’s perfect food,” said Nesbitt. “All vitamins, enzymes, proteins and most minerals originate from the baby sprout!”

“I think there is really something here. People are healthier and happier,” Nesbitt said.

She will be introducing people to sprouting and providing samples at the library on Jan. 30 at 7 p.m. She will explain how people can grow “superfood” sprouts in 24 to 48 hours.

The BWG Public Library is located at 425 Holland St. W. For more information on library programs, check out the revamped library website, just launched this week.

Interest in local private schools rises amid pandemic worries
Aug 14, 2020 3:30 PM
Comments
We welcome your feedback and encourage you to share your thoughts. We ask that you be respectful of others and their points of view, refrain from personal attacks and stay on topic. To learn about our commenting policies and how we moderate, please read our Community Guidelines.