The facility would house the Helping Hand Food Bank and be used as a community hub
Apr 16, 2021 6:30 PM By: Natasha Philpott 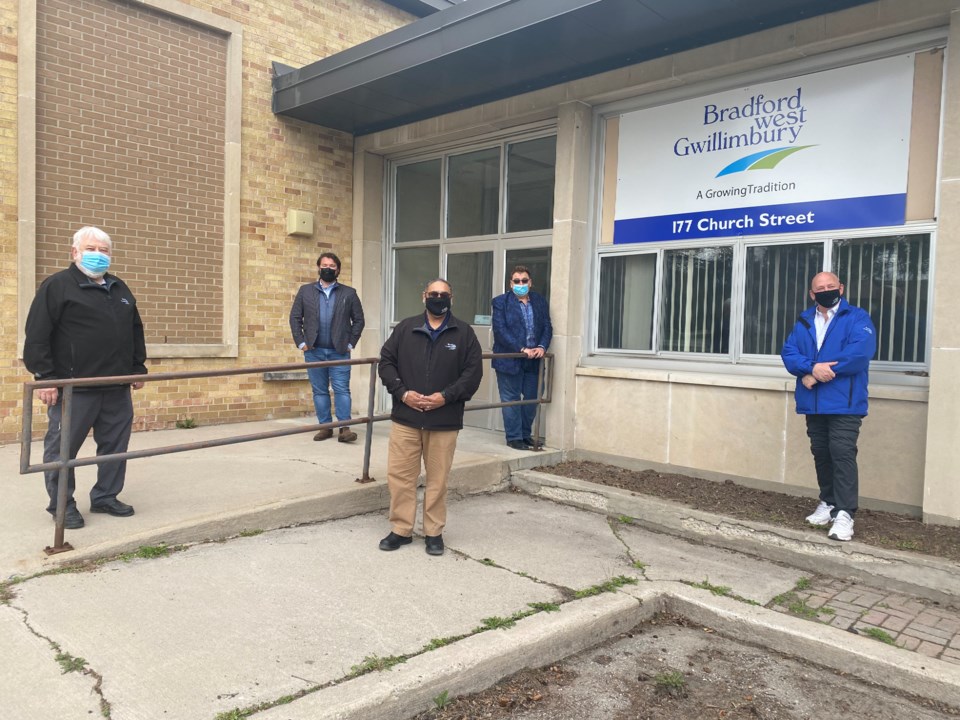 In a Special Committee of the Whole meeting on Wednesday evening, the town unveiled potential designs for a new Community Hub at the recently acquired Bradford Public School property.

Earlier last year, the Town of Bradford West Gwillimbury purchased the property at 177 Church Street, with plans to create a community hub that would house the Helping Hand Food Bank and other community groups, providing space for classes and innovative start-ups. .

"It was a vision of this council this could be a very strategic property for a number of purposes," said Director of Community Services Terry Foran.  One of the priorities was a new home for the Helping Hand Food Bank, currently housed in aging buildings on Moore Street and at the St. Mary's Building.

Using the Town of Georgina's community hub as a reference, the town came up with two design concepts that were presented to council.

Option 1 would create a new entrance and reception space at the southwest corner of the building; double the size of the existing school gym and add storage and a 610 sq. ft. commercial kitchen to create 3,890 square feet of event space, and upgrade the washrooms to accessibility standards.

Flooring and lighting in common areas would be replaced, but most of the classrooms would be left as is, to be upgraded by renters to fit their own needs. An area totalling 3,642 sq. ft. would be opened up for the Food Bank, with an option to expand the space to 4,455 sq. ft. by taking over an adjacent classroom.

Additional parking could be added to the south side of the building, with courtyard amenities within the U-shaped building floor plan. Option 1 also includes a new HVAC system, to replace the existing 22-year-old system and accommodate expansion.

Foran also presented a less-expensive Option 2, which would eliminate the new entrance and any exterior cosmetic work, leave the gymnasium at its current size and eliminate the commercial kitchen, and limit new interior finishes to repainting the common areas. While there would still be the same space available for the food bank, and washrooms would be upgraded, there would be no outdoor amenities and no new HVAC system.

Foran supported Option 1, noting that with the purchase price of the school and the cost of renovations, the project would cost around $252 per square foot for a finished facility comparable to a new build. He noted that the cost of the new fire hall now under construction is about $400 per sq. ft.

"I think it's very important to bring the facility to a standard that we have established with our new builds. It offers good consistency," said Foran.

In particular, he said, the expanded event space would serve the function of a community hall, able to accommodate everything from "cooking classes to courses to recreational programs to youth programs."

The cost estimate includes a 15 percent construction contingency fund - well above the eight to 10 percent standard contingency. Foran explained that the number was high because of the uncertainties of renovating an older building, and the impact of COVID-19 on the cost of materials and labour.

"Everybody is aware we're in a volatile market right now," said Foran. Lumber has gone up over 300 percent since last spring, he noted. Under the circumstances, it will be hard to estimate prices until the project goes to tender.

"A brand new building, you know what you're getting into," agreed Deputy Mayor James Leduc. "A renovation is where you really struggle. You don't know what's behind that wall until you bust it out."

"I don't see a whole lot of difference between the plans, except for the kitchen," Lamb said, questioning the need for the commercial kitchen "when we have caterers out there."

He added, "We don't have a  commercial kitchen in the library when we do an event there," noting residents may not want to pay higher costs for the kitchen use. "We need to have a decent business case... work within a reasonable budget."

"I love the commercial kitchen in there. None of our newer units have anything like this," responded Coun. Peter Ferragine, noting that at the Georgina community hub, the kitchen is "constantly used."

However, he urged Foran and his team to find ways to reduce the costs, while delivering on the vision.

"When we have people looking for a space to rent, if we do a half job, they're going to offer us half (the cost)," said Coun. Ron Orr. He noted that in Georgina, the food bank uses the commercial kitchen to teach residents how to cook.

Supporting Option 1, he urged, "Make it a spot we can really be proud of."

"I personally do like the common spaces, I think they are fantastic," said Deputy Mayor Leduc, particularly excited about the possibility of offering incubator space for innovative start-ups. "You never know when you're going to get the next Google or Amazon."

Coun. Raj Sandhu asked for an "Option 3," that would provide the same vision at a lower cost. "I think you can do some magic," Sandhu told Foran.

"We need to provide this to our community. We invested money in this. We need to invest in that area," he said.

"This needs to be done properly," Contois said, adding that "area residents would appreciate a good-looking building."

"I think we're all wanting to make sure we contain the costs, but I think the fiscally responsible thing is to do it right the first time, and not get ourselves into a decade of unexpected surprises every year at budget time," said Coun. Jonathan Scott.

Coun. Peter Dykie Jr. asked if the cost of Option 1 could be offset by the sale of surplus properties, including the existing food bank building on Moore Street and the St. Mary's Building, "so it's not on the backs of the taxpayers."

Treasurer Ian Goodfellow later assured councillors, "Staff will certainly be returning to council with a comprehensive business plan," that would include consideration of the disposal of the surplus properties.

Coun. Scott also noted that the town could apply for a federal energy retrofit grant, as well as other provincial grants, to help cover costs.

Foran was asked about a timeline, and whether the food bank could be moved into the new hub ahead of the completion of the work.

He suggested that, if an option was approved that evening, the town could complete a detailed inspection, prepare "refined plans" and a more complete cost estimate within six months, and be tender-ready in eight to 10 months. "There's a lot to navigate through on this one," he said.

As for the food bank being able to occupy part of the building sooner, Foran explained that there are occupancy issues.

"The building is not actually occupy-able at this point," he said. "We have to work through the quick renovation and understand through Building and Fire (departments) how we can be permitted to occupy that one area."

He added, "Everything's possible. I can't offer a timeline until we look at it harder."

Coun. Sandhu asked what type of revenue would be expected from the building.

Foran said this would be part of the business case. He noted the 2020 operating cost of the Georgina community hub was $675K, and their goal was to achieve two thirds cost recovery - similar to BWG's goal for its own Leisure Centre.

"It's an aggressive goal to make, but we've done well in condensing our programming," he said of the Leisure Centre, recommending that Council use the same business model for the new Bradford Community hub. "That's ultimately going to be council's decision."

Council voted unanimously in favour of Design Option 1, directing staff to develop a Business Plan that incorporates capital and operating costs, a leasing strategy, and a construction timeline.

BEYOND LOCAL: How to renovate your home without ruining your relationship
May 16, 2021 9:25 AM