Franz Aschwanden is a member of the Bradford West Gwillimbury Local History Association and the Town of BWG Heritage Committee, among other groups.
May 16, 2018 1:30 PM By: Miriam King 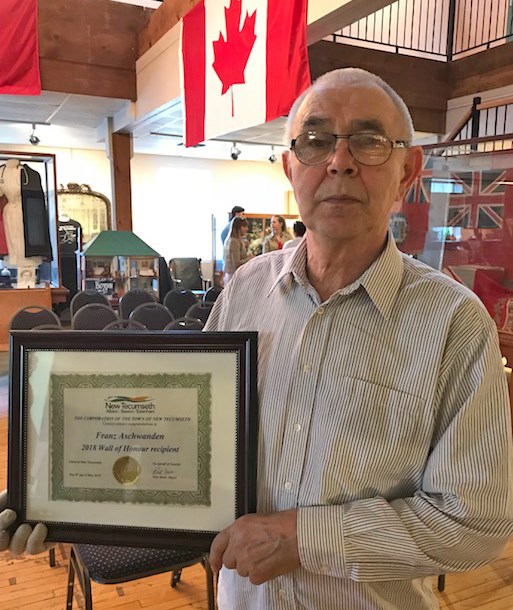 Franz Aschwanden was inducted to the history and heritage Wall of Honour at the Museum on the Boyne. Submitted photo

Alliston’s Museum on the Boyne has a Wall of Honour that recognizes residents of South Simcoe who have made outstanding efforts to promote and protect the area’s heritage and showcase its history.

On May 5, the museum added another Bradford West Gwillimbury resident to the wall, during a special induction ceremony — Franz Aschwanden.

A long-time member of the Tecumseth and West Gwillimbury Historical Society, Bradford West Gwillimbury Local History Association, and the Town of BWG Heritage Committee, Aschwanden has played a key role in events and initiatives that have promoted local history.

He was involved in making the video New Tecumseth: The New Town with a Long Past, and the two-volume written work Governor Simcoe Slept Here: The Legacy of West Gwillimbury.

He was characteristically modest about the honour. “It’s like when my wife makes my favourite cake — I like it, but I don’t know if I deserve it.”

He accepted the honour, he said, on behalf of everyone who was involved in the many events and activities celebrating South Simcoe’s history.