Some teachers were refused vaccines 'due to a misunderstanding around specific eligibility criteria that had recently changed,' regional spokesperson says
May 6, 2021 9:33 PM By: Debora Kelly 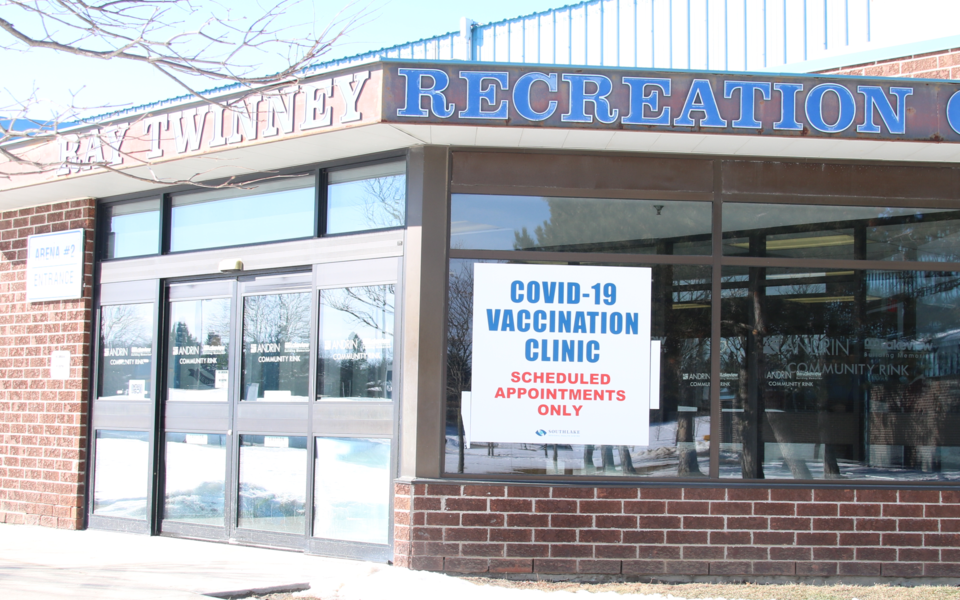 York Region issued an apology today in the wake of continued confusion regarding its eligibility criteria that resulted in teachers being turned away when they showed up for their appointments at Newmarket's Ray Twinney vaccination centre.

"We understand there has been recent confusion regarding vaccine clinic booking eligibility based on differing criteria from York Region and the province, we apologize for that," said Patrick Casey, York Region's director of corporate communications. "We have worked to align our criteria with the provincial rollout."

"Yesterday, it was brought to our attention some individuals were turned away from their vaccine appointments on Tuesday, May 4 at the Ray Twinney vaccine clinic due to a misunderstanding around specific eligibility criteria that had recently changed."

Social media posts and a Toronto television report drew attention to the appointment refusals, prompting the apology and an explanation regarding eligibility criteria and dates.

A post on Twitter said, "I have a letter stating my school is in one of the eligible postal codes.They asked me if my school was open (which no, of course not. Schools are closed). And was told we aren’t working now and can’t get vaccinated."

York Region announced on May 2 that it would open appointments on Tuesday, May 4 to individuals aged 35 and older who live or work in all 16 of its identified high-priority hot spot communities in East Gwillimbury, Richmond Hill, Markham and Vaughan. Prior to that, appointments were available for five and then six of the hot spots.

A teacher posted that he had been turned away at Ray Twinney, which is operated by Southlake Regional Health Centre, despite having hot spot eligibility: "Superviser said teachers in hotspots ineligible even though the provincial site says otherwise. Got a letter from our board saying we’re eligible. He said board was wrong and turned away many teachers today."

I am formally asking for @YorkRegionGovt to reach out to ALL teachers they improperly denied a vaccination to yesterday.

A public apology would be nice too.

Casey said if individuals attend a clinic before they are officially eligible for vaccination, staff have been directed by the public health unit "to turn them away."

York Region opened eligibility on May 5 — one day earlier than the provincial booking system — to all elementary and secondary school workers aged 18 and older, including educators, custodial, school bus drivers and administrative staff, as part of the province's group one of individuals who cannot work from home, Casey said.

However, the public health unit had originally anticipated the group one rollout for educators would begin as of May 10.

Another teacher posted on Twitter, "I just experienced the same thing. Probably one of the lowest moments of my 20 year career when they shoved an email in my face stating to not allow teachers to be vaccinated until the 11th. We have no information telling us it starts on the 11th for teachers. What a joke!"

Special education staff who work in York Region have been eligible since April 13.

York Region stated that it provided the four school board with details regarding the categories of eligibility on May 5, and an earlier version on May 3 providing the anticipated start day for group one.

"York Region continues to work closely with all public and private school boards, we value and appreciate our education partners," Casey said.

"We also value the importance and benefits of in-person learning and the health and well-being of all residents. York Region Public Health and all of our partners highly encourage all teachers and education staff to be vaccinated as soon as possible."

Confusion and frustration regarding eligibility has peaked in recent weeks, as the province announced additional hot spot eligibility that wasn't available in York Region, and the number of categories of prioritization has increased, resulting in residents with appointments being turned away at vaccination centres.

"As we see the demand for vaccinations increase, we see a surge of adverse behaviour as well," Casey said. "York Region Public Health and our health system partners are working hard to roll out vaccines with evolving guidance and limited local vaccine supply."