Some of the most memorable quotes from the York-Simcoe provincial election debate at the Bradford and District Community Centre.
May 17, 2018 10:37 AM By: Jenni Dunning 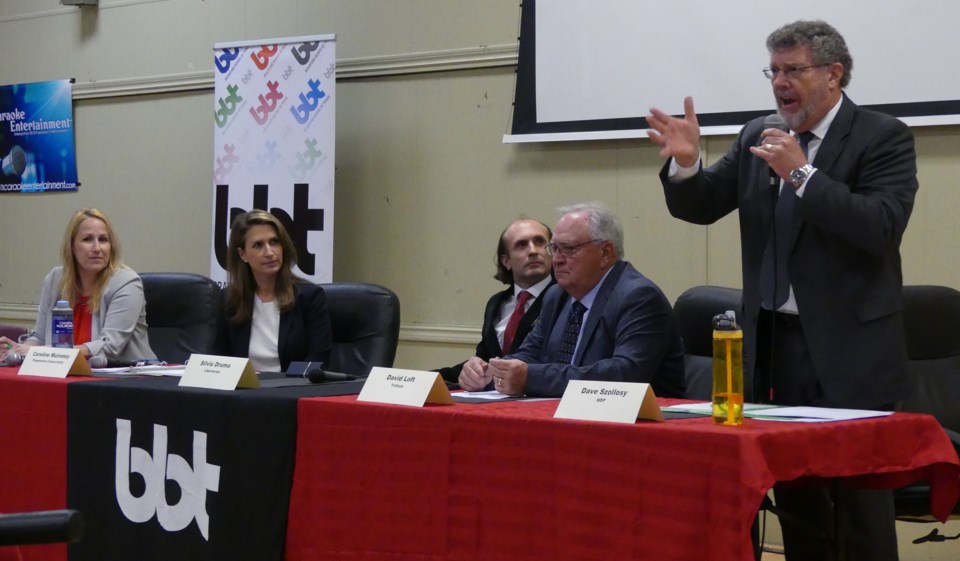 Five of the six York-Simcoe provincial election candidates spar at a debate in Bradford West Gwillimbury May 16. Jenni Dunning/Bradford Today

The Green Party’s Alexandra Zalucky was the only candidate not there.

Here is a look at some of the most memorable quotes of the night.

“Doug Ford firing the CEO of Hydro (One) will do nothing for your bill.” — Loralea Carruthers, Liberal

“When you’re in a hole, you stop digging. We need to stop taking on debt we don’t need.” — Caroline Mulroney, Progressive Conservatives

“There’s something wrong with the government when some young guy can go get Viagra (covered), and I have to pay $56 for some ear drops.” — David Loft, Trillium Party, on health care

“If we don’t have freedom, you have nothing. Government slowly and surely encroaches on every aspect of your life. Why does this have to be this way?” — Silviu Druma, Libertarian

“With no disrespect to the three gentlemen to my left, this is a two-way race.” — Loralea Carruthers, Liberal

“If the Minister of Education was as interested in the math scores as the sex ed curriculum maybe we’d be better off.” — David Loft, Trillium Party

“While Loralea (Carruthers) is passionate, she has been unsuccessful in persuading the Liberal government in listening to her.” — Caroline Mulroney, Progressive Conservatives

“I will commit myself to protecting greenbelt land in this area and expand it.” — David Szollosy, NDP

“It’s insane for a farmer to have half his farm in Simcoe and half his farm in York. He has to treat his petunias differently than he treats his marigolds.” — David Loft, Trillium Party, on Holland Marsh annexation