SACRAMENTO, Calif. — California is on the brink of a new stay-at-home order that would close businesses and curb travel in regions that could see hospitals overwhelmed by coronavirus patients. Gov.
Dec 4, 2020 2:09 AM By: Canadian Press 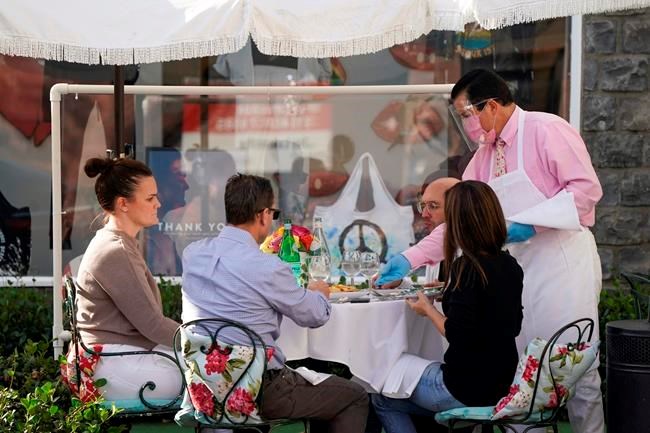 SACRAMENTO, Calif. — California is on the brink of a new stay-at-home order that would close businesses and curb travel in regions that could see hospitals overwhelmed by coronavirus patients.

The new order divides the state into five broad regions and restricts those with intensive care unit bed capacity below 15%. On Thursday, Newsom said four regions — all but the San Francisco Bay area — could meet that threshold “within a day or two.”

California’s virus hospitalizations have nearly quadrupled since mid-October and now stand at 8,240, including 1,890 in intensive care units. The Department of Public Health reported 19,437 deaths since the start of the pandemic, including 220 health care workers.

The new stay-at-home order will last at least three weeks, cutting sharply into the most profitable shopping season and threatening financial ruin for businesses already struggling after 10 months of on-again, off-again restrictions and slow sales because of the pandemic.

“This means no income for the rest of the year,” said Lam Nguyen, who owns a nail salon in the Sacramento suburb of Citrus Heights. “I’m sad and scared, not only for myself but all my friends with nail and hair salons. A lot of us are in debt.”

Amy Lovece, a hairstylist who rents a chair at Salon 544 in downtown San Luis Obispo, said she already lost about half of her yearly income.

“It’s sad that (Newsom) keeps closing us down. It’s unnecessary because salons are not the problem,” said Lovece, 56. “For the ones who are following the rules, it’s just not fair. I just go between home and work. I don’t go to parties or bars and I just want to keep working.”

Lovece said she was angry that the county was grouped in the Southern California region with counties hundreds of miles away with far greater demands for ICU beds. Only one out of 53 ICU beds in San Luis Obispo county was occupied with a COVID-19 patient as of Thursday.

The order is the latest balancing act as the state tries to slow the exploding infection rate — blamed on people gathering outside of their households — without further crashing the economy.

After California closed all but essential businesses in March, the state lost 2.6 million jobs in two months. About 44% of those jobs returned when restrictions were eased as people heeded social distancing and mask-wearing precautions and new cases fell dramatically.

But by fall people were congregating more for holidays and celebrations, while cooler weather drove them inside, where the virus flourishes. California is now averaging nearly 15,000 newly reported cases daily.

Public health officials warn that the toll from Thanksgiving gatherings could start to swamp hospitals by Christmas.

In the last month, the state imposed restrictions in 52 of the state’s 58 counties, including asking people not to leave the state and implementing an overnight curfew for all but essential trips, such as getting groceries.

“We of course had hoped and wanted to see more from that already, but we haven’t,” he said.

The state might not need such a broad shutdown if it had better data on where people are being infected, said Dr. Jeffrey Klausner, an epidemiologist at the University of California, Los Angeles Fielding School of Public Health.

Are stores and nail salons chiefly to blame or should restrictions be focused elsewhere? Lack of that knowledge reflects “a failure of public health," Klausner said.

He likened the current approach to shutting down food production, restaurants and grocery stores because of a salmonella outbreak.

“That’s not the way we traditionally work in public health,” he said.

Some counties also have bucked the rules, following cues from state and local elected officials who have criticized the governor for going too far.

Shannon Grove, Republican leader in the state Senate, criticized Newsom on Thursday for continuing “to disrupt life as we know it without releasing the full data behind his decisions.”

But in Los Angeles County, the nation's largest with 10 million residents, Sheriff Alex Villanueva announced that his department would be conducting “targeted enforcement on super-spreader events." The sheriff previously said he had relied on voluntary compliance with health orders.

Even state government has felt the impact. Newsom and his family are self-quarantining at home after three of his children were exposed to an infected person. Two staff members in the governor’s office have tested positive for COVID-19 but hadn’t been in contact with Newsom, the office said.

Beginning Monday, state government offices will close for three weeks except for those involved in “critical functions” such as public safety, prisons, social services and unemployment insurance claims processing, according to a Human Resources Department email sent to department leaders, the Sacramento Bee reported.

Newsom acknowledged the difficulty in following the rules. But he urged people to stay vigilant and said progress is being made on a vaccine.

“There is light at the end of the tunnel," he said.