PRAGUE, Czech Republic — Canada's Eugenie Bouchard is off to the quarterfinals at the Prague Open. Bouchard, from Westmount, Que.
Aug 13, 2020 3:46 PM By: Canadian Press 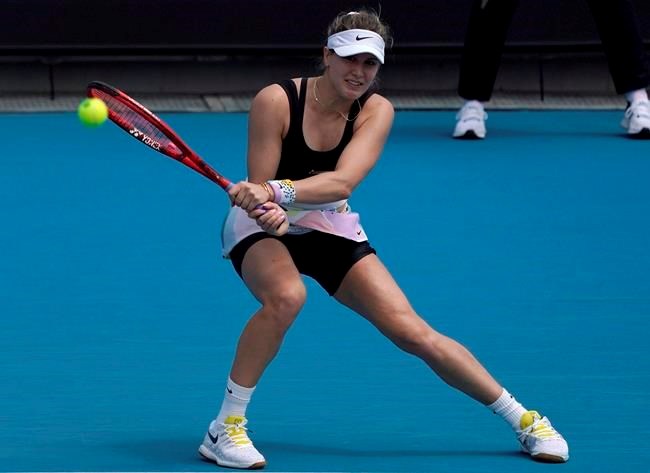 PRAGUE, Czech Republic — Canada's Eugenie Bouchard is off to the quarterfinals at the Prague Open.

Bouchard exacted revenge on the 72nd-ranked Zidansek, who beat the Canadian in the opening round of Wimbledon last year with an 8-6 triumph in the third set.

Zidansek fought back from a 4-1 deficit in the second set to force a third set Thursday before Bouchard regained control, prevailing in two hours 52 minutes.

"I was pretty proud of myself with how I was able to bounce back after losing the second set," Bouchard said. "I kind of regrouped and told myself to just get back to playing my game. Not let her dominate the ball, but kind of step up and take advantage."

Bouchard is playing in an official tournament for the first time since January when she suffered a wrist injury. Just over a month later, the WTA Tour suspended play because of COVID-19.

This is the second week of play in the WTA Tour's restart. No fans are at the facility.

"We've been practising for months, it kind of feels just like practice or a practice match or an exhibition," Bouchard said.

"It feels very real because we have an umpire and ball boys and we obviously knows it's a real match but the atmosphere definitely makes it feel a little more like a practice match, which we do all the time."

However, Bouchard realizes more people are paying attention to an official match than a practice.

"I try to think of fans watching online or my family who'd wake up to watch," she said. "I know they're there somewhere around the world."

Given a wild-card into the event, Bouchard, ranked 330th in the world, will next face No. 3 seed and world No. 23 Elise Mertens of Belgium in the quarterfinals on Friday.

Bouchard is projected to rise to No. 272 if she loses to Mertens, but the former world No. 5 could get back into the top 200 if she wins the tournament.

"My first thoughts are she's a great player, she's highly ranked for a reason," Bouchard said. "I'm going to be the underdog for sure and I'm just going to go there and try to play my game."

Meanwhile, top-seeded Simona Halep came from a set down to defeat Barbora Krejcikova 3-6, 7-5, 6-2 to reach the quarterfinals.

Down 2-0 in the final set, Halep replied by winning six consecutive games, converting her first match point when the 118th-ranked Krejcikova double-faulted.

“She played great and it was really tough to find my rhythm,” Halep said. “I just stayed focused for every ball I played.”

The second-ranked Halep needed six set points in the second set to level the match, having lost her serve six times up to that point. She double-faulted 10 times in the match.

“My serve is not great at this point but I keep working on it,” Halep said. “Hopefully, it’s going to get better day by day.”

Halep took a medical timeout after the second set for her right shoulder and needed more treatment in the final set.

“Then, I could serve a little bit stronger, so I needed that and I'm happy that it worked,” she said.

Sara Sorribes Tormo eased past Laura Siegemund 6-2, 6-3 to play either Irina-Camelia Begu or Leonie Kung in the quarterfinals.

— With files from The Associated Press.

This report by The Canadian Press was first published on August 13, 2020.

Clark's putback at buzzer lifts Storm past Lynx 88-86
Sep 23, 2020 12:24 AM
Comments
We welcome your feedback and encourage you to share your thoughts. We ask that you be respectful of others and their points of view, refrain from personal attacks and stay on topic. To learn about our commenting policies and how we moderate, please read our Community Guidelines.