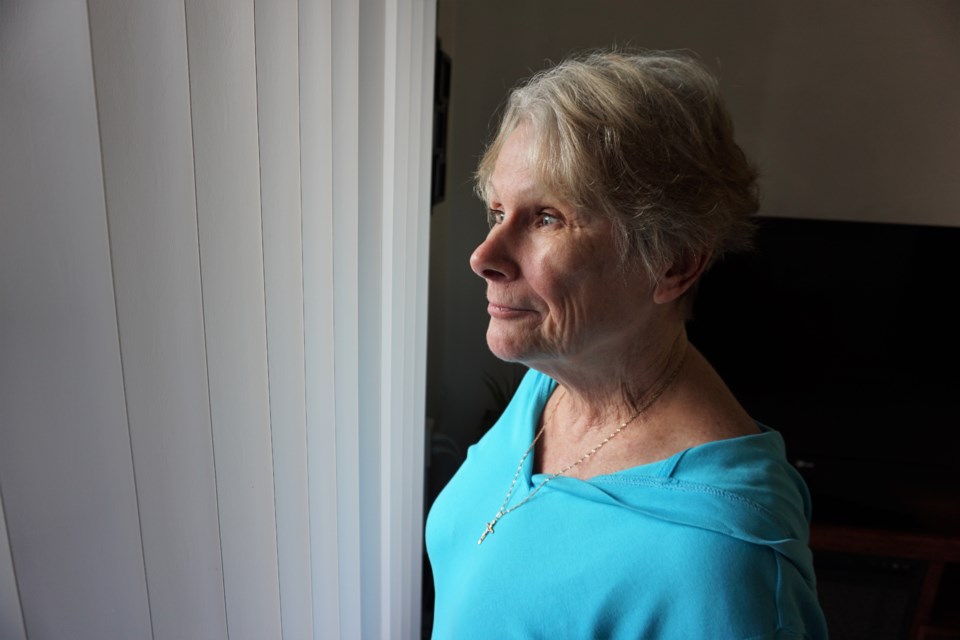 Sharon Turcott is one of six survivors of domestic abuse who have shared their stories for the new 30-minute documentary Shelter Me. Jessica Owen/BarrieToday

“After I left (my ex-husband), I would pick up a book to try to relax, and after maybe two pages I’d just throw the book because I couldn’t get into it. Through counselling, I found the reason I couldn’t get back into reading is because I associated it with him. It was a trigger,” said Turcott.

Turcott’s is one of six stories that will be explored in Shelter Me, a 30-minute documentary film produced by Rogers Barrie that seeks to explores the reality of domestic abuse locally.

Six local women who have experienced domestic violence were interviewed for the film, which will have its premiere screening at the Five Points Theatre on Friday night. The film was produced in association with the Women and Children’s Shelter of Barrie.

“I’m excited to be part of it,” Turcott said in a recent interview with BarrieToday. “There is life after abuse.”

Turcott recalls her ex-husband enjoyed a specific television program she hated, so whenever he would put it on TV, she would read. When her husband would see her reading, Turcott said he would talk non-stop to get her to shut the book.

This was one of many examples Turcott mentions of manipulation her husband used to control her behaviour, which also included destroying her possessions when she didn’t act the way he thought she should.

Turcott says when her husband threatened her life in 2012, it was a pivotal moment for her.

“He said I’d better sleep with one eye open,” she said. “I barricaded myself in my bedroom and I hardly slept at all. The next day I left. After that, the house went into foreclosure and I didn’t know what I was going to do.”

Turcott first went to the Women and Children’s Shelter of Barrie for help.

“I joined, what they call, a survivor’s group,” said Turcott. “It’s where you’re able to talk about your abuse.”

The shelter provided counselling resources for Turcott, and helped her find housing.

“Honestly, I wouldn’t be where I am today if it hadn’t been for them,” said Turcott.

Turcott says the abuse she suffered was mostly verbal, psychological and emotional.

“He was controlling. Only physical a few times. To this day, I still see a counsellor. It’s taken me this long to get to this point,” she said. “I felt shame because he was my fourth husband. I was embarrassed because, after four marriages, I still couldn’t get it right. So, I really wasn’t up front with my family. I kept to myself.”

While the screening takes place on Friday, the film is planned to be put up on YouTube eventually to reach a wider audience, and Turcott hopes that hearing her story may help others.

“I don’t feel trapped or helpless anymore. I feel empowered,” said Turcott. “I used to be a very, very closed book. Now, I’m an open book and I’m prepared to share any of the chapters.”

“Hopefully a woman seeing my story, and all of our stories, might help her to see she has options. If I had known what was available way back then, I would have been able to get out of my situation (sooner),” she added.

And these days, what lines Turcott’s bookshelves?

“I’m reading Unsolved by James Patterson. He’s one of my favourite authors,” said Turcott, with a laugh. “I also love Fern Michaels. I’ve gone through every single one of her books. Everyone at the library knows me!”

For more information about the Women and Children’s Shelter of Barrie, click here. To inquire about ticket availability, email Kelly Letourneau at kelly@barrieshelter.com.