Some Bradford parents are upset after learning their children will have to attend new schools come fall 2022.

Bradford has experienced tremendous growth over the years and was recently approved for the building of two new elementary schools, one in the north part of town and one in the south, set to open for the 2022/2023 school year.

As such, new attendance boundaries need to be made and the Simcoe County District School Board (SCDSB) is currently undertaking an Attendance Area Review for Bradford elementary schools, including Chris Hadfield PS, Fieldcrest ES, Fred C. Cook PS, and W.H. Day ES.

The proposed changes were shared in a virtual presentation last week, and some parents are frustrated and angry after learning their children will now have to leave their current schools to attend one of the new schools.

The current boundaries for the new Bradford South school at 742 Simcoe Rd. will have an approximate population of 540 student upon opening, including:

With the new housing developments coming to the area, the school's population will continue to increase. 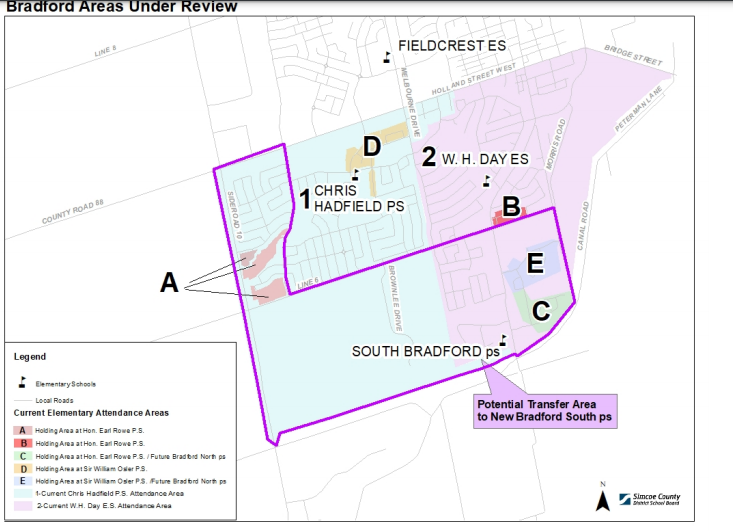 The new north Bradford elementary school at 400 Crosslands Blvd. has a projected population upon opening of 480 students including: 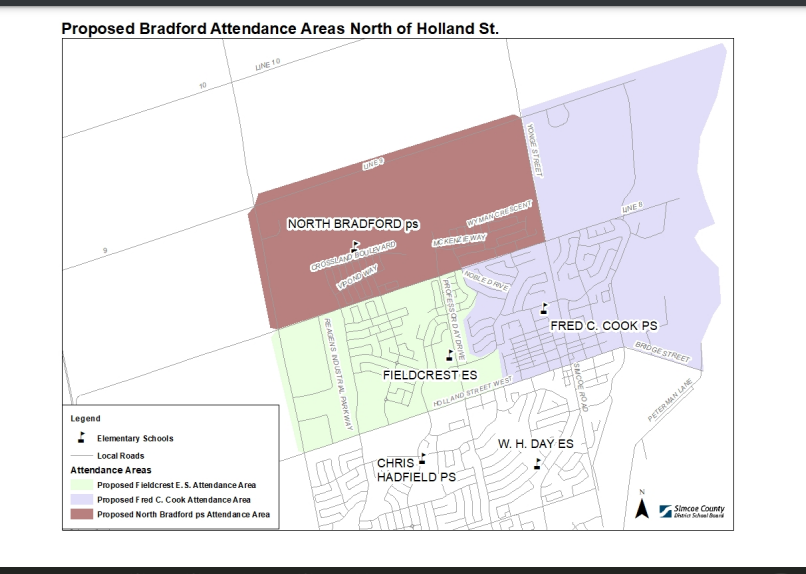 The school board says the new proposed boundaries will help alleviate the current school capacity issues and will balance enrollment across the region.

To ensure a smooth transition, the school's principals will work on exciting events to ensure students are able to meet and are part of creating the culture of the new school.

Names for the new schools have not been chosen yet and will be selected by a naming committee and submitted to the Board of Trustees for approval.

Sreechandrika Nikhil lives in Grand Central and is concerned about having her kids leave Chris Hadfield PS, which is closer to their family home, to attend the new school on Simcoe Road.

"As a parent, the new school is extremely far for little kids in elementary school, despite the fact that there will be a school bus provided.  The commute that the kids will need to go through each day can be compared quite similar to an office goers commute," she wrote to school board trustee Debbie Connors.

"There are other challenges such as change for kids with special needs, additional stress for kids utilizing before and after school care will now need to be dropped off even earlier than before to take into account the time it will take to reach the school. Not to mention the stress about our children's safety.  Emergency pick-up will be quite challenging as well.

"The rationale provided by the board mentions that this move will reduce the population pressures faced by Chris Hadfield and enable more kids walking to school thereby reducing traffic congestion. However, with this proposal, kids within the Grand Central subdivision will not get the option to walk to school considering the distance."

Aniket Benodekar is another parent upset over the proposed changes, noting the distance to the new Bradford south school would be 5.5km from his home, instead of the 1.3km distance to Chris Hadfield.

Traffic congestion, long bus rides, and no way to walk to school are just some of his concerns with the new boundaries.

"Emergency pick up is now a nightmare where parents with no mode of transport will face difficulty in picking up kids," he pointed out. "It will be logistical & Traffic nightmare to transport 330+ students via bus."

He recently started a Facebook group for concerned parents to connect and share their thoughts about the boundary review.

So far he has two recommendations for the boundary review: keeping the west side of Langford Boulevard in the Chris Hadfield boundary area and allocating the section between Melbourne and Sutherland to the new Bradford south school.

He also would like families to have a choice between staying at Chris Hadfield or going to the new school.

Stephen Romano who has lived on Armstrong Crescent for the past nine years is upset he would have to send his son to the new Bradford south school instead of Chris Hadfield.

He said it would be difficult for him and his wife to take him to school because their daycare won't take their son that far to drop him off, and is worried about long bus rides.

However, Board staff are currently assessing transportation scenarios with the Simcoe County Student Transportation Consortium, and specific times, routes, and stops are unknown at this point.

"It would be pure speculation to comment on ride times. It is possible that some students who currently walk may be bussed to a new school, depending on the final recommendations and Board approval," said SCDSB Manager of Communications, Sarah Kekewich.

Parents are encouraged to submit their feedback through the online ThoughtExchange platform until June 18.

"Staff and the Board of Trustees take all comments and feedback seriously," noted Kekewich.

"This feedback can better inform staff about what additional information the community may require and identify areas that may need further analysis. It is also helpful in developing transition and implementation plans."

Once all the data is collected, it will be evaluated and modified as needed. A report will then be provided to the SCDSB Business and Facilities Committee in fall 2021.

To view the proposed boundaries and watch the videos from the SCBDB, visit here.

For clarification on details related to the attendance area review, contact planning_Bradford@scdsb.on.ca